Start a Wiki
This article is written in British English

The Hermiton Herald was a newspaper under ZombieCleo's publishing and distribution company, Cleo's Copying Ink. The news was described as 'unbiased and completely factually based news' by her. It was made to spread news and events, as well as advertisements (submitted by other Hermitcraft members). A copy of The Hermiton Herald costed 1 gold ingot. Each edition was written inside a book and quill. In Season 7 of Hermitcraft, it is different. After the Head Games, the land was used to create the new Hermiton Herald Headquarters. There, one can find all the latest volumes and pay for their own newspaper. A subscription costs 1 diamond block. Another major change is that the newspaper is now in the form of a map which automatically updates.[1]

Appalled! Shocked! Disgusted! This is how most normal people would feel when faced with the idea of slaughtering countless native inhabitants to make the lives of a small population of invaders a little bit easier. Not so for a small group of murderous thugs that recently made a mass slaughter of the native inhabitants known as 'villagers'. It is known that this small group of as yet unidentified bandits set several hundred villagers on fire and then proceeded to chase down the fleeing people into the arms of waiting zombies who swore to raise them as their own kind, away from the murderers.

The newly opened packed ice shoppe in New Hermiton sold old of it's product in the first day.  Such shortages make it seem that the owner grossly underestimated his market. No comment has been made.

Amid the hype surrounding the new town shopping district it seems that certain company owners have engaged in a dirty tricks campaign to squash rivals. Actions include theft of property and obscuring advertisement.

Want people to hear about your product? Why not place an advertisement in the Hermiton Herald. Competative rates.

Welcome iJevin to New Hermiton.  He is already leaving his mark in the business district.

Reports have been received that a fungal infestation has occured at Muse Meats (A division of SpumCo) and has contaminated their produce. The owner of SpumCo made a statement to this reporter that "it poses a health risk to future customers.". "The food wars" is a term coined by Spumwack to describe his unethical treatment of neighbouring businesses.  It is suspected that this infestation was retaliation by other food business owners and Spumwack has decided to point fingers at soup shop owner iJevin as a suspect.  Perhaps as a way to disguise his own poor manufacturing decisions.

Hermitcraft Construction Company. Wanna build something but don't have the skills? Wanna build something but don't have the time? Just hire Hermitcraft Construction Company! We'll build whatever you want! All you need to do is provide the materials! (No guarantees on completion dates. Terms subject to change as we see fit. If insufficient materials are provided costs might rise... Or skyrocket. It's your choice. Hey! Don't point any fingers, you called us!) You have three hours.

It was this reporters pleasure to be one of the first to experience a retail haven that can be found at Hypno's Random Item shop. Simple on the outside, a tribute to the fallen villagers of last week perhaps, Hypno has created a store that whilst not specialised seems to capture every facet of what a Hermit truely needs all at great prices! The business district is booming and this store is set to make it's mark!

A massive explosion rocked the city of New Hermiton and one dead body was pulled from the wreackage. Pungence later swore vengeance on Skyzm, possibly involving Ninja Turtles. The lawless nature of this town was noted by Xisuma who swore to consider doing something about it. Bodyguard prices are rocketing in response.

Hermiton would like to welcome a bouncing baby Marriland to the server!

After a long campaign, the head game was won by Grian and Scar. They obtained 7724 points through farming bounties and the slaughter of innocents. Final Scores:

Thanks to all! From the arena to the carnage. You were awesome!

NEWSPAPER UNCOVERS SECRET CAMPAIGN!
Through crack reporting skills[2] the Herald has discovered that Mumbo is making a bid for mayor. No one seems to know exactly what he wants to be mayor of, or what the job actually entails[3] but we do know that he is responsible for the current Button situation. This has pitted Hermit against Hermit as they strive to reach the best tier,[4] red.

IN A WORLD OF SPOONS, EVERY MEAL IS SOUP!
"Spoons for everyone!" declares future mayor hopful[6] Mumbo.[7] A campaign promise that made utensil owners everywhere question the ability of the mustachioed marvel to deliver on his pledges. Local mysterious stew prices have risen in anticipation of an increase in spoon based sales. Fork hevy[8] industries like steak remain unphased as hands still exist.

VISIT THE CONCRETE SHOP
The real one[9] not that fake one.

Hills, who is running unopposed, promises to throw voters a bone by putting a dog biscuit in every bowl. It is unknown at the time of this print if[10] he knows that Hermits,[11] are not in fact,[12] dogs.

Mayoral candidate Scar has received a stinging blow to his campaign. Herald reporter Beesuma has revealed to the Herald,[13] Scar's lifelong obsession with licking diamond blocks. Scar is reported as saying, 'If there is a diamond block nearby[14] I'm going to lick it.' This comes only a week after Scar defended himself for his greenhouse turned mob farm in the shopping district saying[15] 'It's not that b[16] bad,[17] it's just a few mobs.'

Mumbo Jumbo, famous for his finely tailored suits and magnificent mustache,[19]has a plan for his mayorship. Unbeknownst to him, his super intelligent AI named 'Grumbot' has a plan as well. The Herald has uncovered that Grumbot has a,[20] 'secret plan' for Mumbo and his manager,[21] Grian. Grumbot went on to say, 'Beep boop beep'[22] which needs no translation. Only time will tell what's going on within the jumbled circuitry of the Grumbot robot.

The long awaited mayoral race for the diamond throne is fast approaching. Election Day is set for June 23rd[23] giving candidates a few short days to win over voters. Supporters,[24] shirts, and signs of all types have shown up around the server as our polls indicate the race is very close.

'To become a mayor you must move mountains.' - GTWSCAR, On tuesday, Scar was elected mayor of hermitcraft. He credits his win on his loyal manager, Bdubs, and cat, Jellie. In the other race, Joe Hills was elected dogcatcher. Local dogs responded by demanding more bones.

Accomplished knight of the Wels, A.K.A Welsknight, has won the first archery competition at the bullseye game in target. His journey to grand champion began in round 2 of the event, where he edged out his oponents by a single shot: he then went on to best noble champions, IJevin and XB in the championship round. Other competitors inclueded Beef, Joe and Cub. The game is now open to all hermits at the great pyramid, Congrats Wels

Quote of the Day

Mayor on the move

Has mayor Scar let the aura of the diamond throne go to his head? In his first major act as mayor, Scar bulldozed poll stations and booths alike. "Polls schmolls, who needs 'em?" said Scar when asked about it. This bold move has, so far, added a job board, trees and the first non-ugly roads. Some hermits expressed concern about how the native mushroom population might react. One giant mushroom was quoted as saying nothing because mushrooms can't talk. When will the mayoral land grab end? Only time will tell.

The Hermiton Herald has learned of a expansive new game beneath the shopping district. "Decked Out" is a game described by the game creator, Tango, as a "Deck building dungeon crawling, treasure hunting, swashbuckling, collect 'em all, find 'em all, catch 'em all, do it all, trading game." Our editors can't confirm the validity of this comment because they're incompetant, but oh well.

Let the giant ravenger head eat you to find the entrance to this elaborate game. The only question is, will you get, decked out?

The Mayor's Diamond Throne is gone!!! Reports show that all diamond blocks have been mysteriously replaced with mycelium. Top suspects include aliens, cows driving forklifts, and a mystery mustached man seen in the area. The investigation continues.

Minecraft Championships: the Hermiton Herald congratulates Cubfan135, FalseSymmetry, and Rendog for winning the MCC Championships this past month. 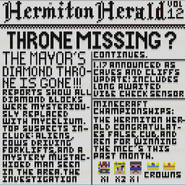 Add a photo to this gallery

Retrieved from "https://hermitcraft.fandom.com/wiki/The_Hermiton_Herald?oldid=35369"
Community content is available under CC-BY-SA unless otherwise noted.