This season's world was based around a Mesa, where most Hermits set up their bases. For the first time, a system of dividing the playing area in function-based districts was employed, colour-coded as such: Commercial (brown), Entertainment (orange), Farming (yellow), Industrial (green), Municipal (white), Residential-North (blue) and Residential-South (purple). 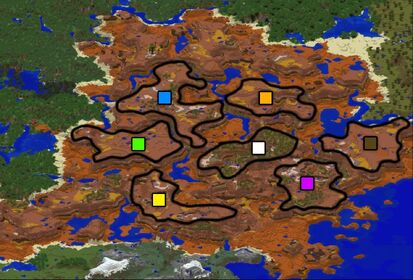 Hermits living in the North Residential District included: Cubfan135, FalseSymmetry, Iskall85, MumboJumbo, GoodTimesWithScar, TangoTek, Welsknight and xBCrafted. Hermits living in the South Residential District include: ZombieCleo, (to be continued)... Docm77, EthosLab, and PythonGB did not have bases in either of the residential districts. Instead, Docm77 & EthosLab set up a gaming area and PythonGB set up a sea town nearby (but not in) the South District.

Appeared but did not make any videos

Whitelisted But Did Not Appear

Hermits Who Left Before This Season

The following are the bases of each Hermit.

To see all the episodes and videos made on Season 4, refer to Season 4 Episodes.

Retrieved from "https://hermitcraft.fandom.com/wiki/Season_4?oldid=57305"
Community content is available under CC-BY-SA unless otherwise noted.