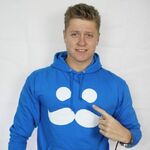 "Hello everyone this is Mumbo and welcome back to another episode on the Hermitcraft server."

Mumbo Jumbo is a YouTuber and active member of the Hermitcraft server known for redstone videos. He joined at the start of Season 2. As of now, he has well over 4 million subscribers. He is one of the four hermits who have over a million subscribers on YouTube. His most viewed video is "Minecraft: 20 More Doors In 100 Seconds", a sequel to his "Minecraft: 20 Doors in 100 Seconds", videos where Mumbo showcases 20 redstone piston doors by walking through all of them in under 100 seconds.

In Hermitcraft Season 5, Mumbo's built his base from an ocean monument. He cleared out the monument and the surrounding water in order to create a guardian farm. Underground, he created a storage system that was decorated with different 'biomes', with each biome corresponding to a group of blocks/items. He also made a diamond structure on the surface of the ocean around the hole. He later expanded, building the structure's he later called 'coffee tables' where he built his many farms for Season 5. On a coastal taiga biome nearby he also built a town. This town featured a few buildings and a redstone quarry. He also created TNT powered tree and cobble farms on an island he suitably named 'TNT land'. He decorated the island with a wall and a roller coaster.

Mumbo also made a few contributions to Season 5's gaming district. His first was the Slabyrinth, which was a minigame where you would have to navigate through a maze as fast as possible. Later in the season, he built a mini theme park, which boasted three separate minigames. He made an arcade basketball minigame, a whack-a-mole minigame, and a minecart race minigame. Mumbo later created an elytra course called 'Hermit Flies'.

In Hermitcraft Season 6, Mumbo's fifth season on Hermitcraft, the Youtuber lives on a group of small islands off the coast of the Futuristic District. On the largest island, Mumbo constructed a treehouse that was later removed because it didn't fit the futuristic theme. Mumbo has also built a bunker beneath the island, that was later flooded with water. Mumbo argues that a post-apocalyptic theme is still futuristic, and has left the bunker. Mumbo's storage system, a massive sphere on top of the largest island, dubbed the 'MumBall', is currently the biggest build of Mumbo's on the server. Mumbo has bought the services of GoodTimesWithScar to terraform the islands into blockier shapes and construct many farms around the MumBall.

On his second-largest island, he has constructed a villager breeding and trading system. He called this place 'Evil Island'. After the release of 1.14, when all villager based farms broke, Mumbo decided to retire Evil Island. He made the structures into ruins by covering them with leaves made to look like giant vines.

In the shopping district, Mumbo has constructed his 'Iskallium Shop', where he sells slimeballs, and a 'Spoiler Store', where he told players they had to pay a fee for spoiling the shop before his video came out. However, after the video came out, the store became useless, and was later repurposed as a 'Film Store', where Mumbo would a film advertising other shops for a price of 64 diamonds. So far, Mumbo has made 2 advertisements, for Xisumavoid's Instant Repair store and for Team Star in the Prank War. Mumbo's Pop-up Rocket Shop was a competitor to Tango's rocket shop, the shop was meant to disappear and relocate if Tango found out about it. However, when Tango found out, Tango decided to "blow up" Mumbo's shop. Mumbo later found it at the build limit. He was also worked with his Architech buddies Iskall and Grian to create Sahara , a store designed to sell a lot of different items, inspired by Amazon in real life.

Mumbo Jumbo and Grian created an alliance, known initially as Build Stone, but later changed to Architechs. Grian realized that, combined with Mumbo's redstone skill, they could achieve a lot more than Grian's building could do alone. This was also strengthened by the fact that Mumbo and Grian were already good friends, and Grian, being new to Hermitcraft in Season 6, didn't know many of the people on the server. Mumbo and Grian constructed a messaging/mailing system between their bases to send messages to each other when one is offline, and to keep others from knowing their plans. Mumbo and Grian also created a machine called the Stachinator. It removes Mumbo's mustache, and randomly places it somewhere else on the server. They now charge people three stacks of diamonds to run the machine. Mumbo has also created a redstone water-elevator for Grian that takes advantage of the new 1.13 water mechanics to shoot Grian up to a given floor.

After the prank war, Mumbo and Grian also recruited Iskall to join the Architechs due to him helping spur the early prank war and also to help build Sahara, a shop inspired by the real-life Amazon and a plan to rival ConCorp. Grian was mainly involved in the building of the store and was helped by the others. Mumbo and Iskall focused on the redstone system.

Mumbo alternates between posting Hermitcraft and Redstone videos on his channel, daily, skipping Monday. His older redstone videos have been mostly tutorials, where Mumbo shows how to construct a redstone contraption, and showcases, where Mumbo shows off a redstone build he has made. Lately, however, Mumbo has been showing his process of creating contraptions, by taking on challenges, and experimenting with new ideas. He sometimes issues challenges to viewers, and then creates a video later showing off the best contraptions he's found. Mumbo also has a series called 'I build your silly redstone ideas', where he constructs several redstone builds suggested to him, generally on his Twitter. Mumbo also has a very old series called '20 doors in 100 seconds', where Mumbo constructs 20 piston doors, and showcases them by walking through all of them in under 100 seconds.

Mumbo occasionally posts a non-redstone, non-hermitcraft video. Some recent examples of these are "Things only ORIGINAL MINECRAFTERS Remember! ", "20 SMALL Features in Minecraft That Make it GREAT! ", and "How to BUILD NEW THINGS in Minecraft! ". Mumbo also occasionally makes videos about Minecraft life hacks, and does experiments to help him play more efficiently.

Mumbo also has a second channel, which he calls the Filming Channel. This channel was called 'Mumbo Vlogs', until later changed to 'Mumbo'. On this channel, Mumbo will occasionally post short films, or mini-documentaries. Mumbo has spent some of the last couple of years attempting to and learning to make, high-quality short films.

Retrieved from "https://hermitcraft.fandom.com/wiki/MumboJumbo?oldid=7803"
Community content is available under CC-BY-SA unless otherwise noted.