YouTube Content Creator
Keralis is a YouTuber and member of the Hermitcraft server. He joined the server in Season 1 and has amassed 2,360,000 subscribers[1] on his YouTube channel. He is known for his building skills, and his numerous building tutorials. His most popular video is Minecraft Lets Build: Small Modern House 18x18 Lot.

Keralis joined HermitCraft Season 1 in May 2012, invited by Generikb. He settled on a jungle biome and built his first base. He then travelled to a desert biome and built his second base after finishing the first one. He also built a game in the minigame district called Keralis Bush-o-rama.

Keralis first built a rustic house at Old Hermiton. He later collaborated with Xisumavoid in building a huge Asian-themed temple.

Keralis then settled on an extreme hills biome. He built a tourist attraction there called the Boobie Mountain.

He also built a suburban house in New Hermiton, a community area created when the server updated to Minecraft 1.7. He later travelled to a mesa biome and established the Boobie Outpost.

Keralis invited his wife to play on the server and made a series called 'Wife vs Minecraft Season 2' They built a suburban house on the Hermit Hills.

Keralis joined the server again after 4 years of inactivity. In his first episode, he entered a Nether portal which led to Area 77. GoodTimesWithScar and Docm77 did not recognise him and trapped him in a chamber with Shulker boxes full of building blocks for him to use to prove himself. He was eventually released and escaped to a hill where he built his modern house based on another tutorial video overlooking Area 77. He eventually moved to the new village with BdoubleO100. He was part of IDEA, a rival to Sahara and ConCorp, with partners BdoubleO100 and Xisumavoid. He placed second in the Is That Sheep Looking at Me? championship game show hosted by Zedaph.

His demise bunker was a secret modern house hidden by a 3 by 3 piston door in some sewers he built underneath BdoubleO100's house. To get in, you would have to flush yourself down the toilet and activate the piston door using secret notebooks. The base had a living room, dining area, pool and study as well as his dogs Pina and Colada. He helped demise ZombieCleo in IDEA, and later placed 6th after dying to TangoTek's trap in MumboJumbo's witch farm.

Keralis ended the season in his Season 6 Episode 18, saying the new Season 7 would start 'very very very soon'. He finished his sewer Demise base by building an office and kitchen in a limited time before the season ended and the server shut down. He also placed some bushes in his bunker. He ended the season by walking into the infinity portal and playing his classical RUN music, flying around his favourite places on the server. He also played RUN, even though there were no boxes to win.

Keralis started this season by building a construction site as his starter base which later turned into an industrial harbour and city. He moved into BdoubleO100's starter base temporarily. Initially this was to gamble at Docm77's base, though BdoubleO100 drew him in with a game that provided significantly more diamonds than Docm77's. This led to a series of escalating pranks, and the two were constantly in a 'war' with Docm77 after they destroyed Mount GOATmore by 'accident'.

Keralis then returned to the construction site start base, which is near VintageBeef's hacienda/resort town, and built it up into a massive industrial port. It includes a ship, cranes, vehicles, roads, street art underneath an overpass, skyscrapers, a bank and is continually receiving more features. For multiple episodes, he has been moving a turtle named Carlos which VintageBeef built in an attempt to stop the expansion of Keralis' base. Keralis built a "peacekeeping" tank in episode 34 pointed directly at Carlos, but moved it back following a deal between the two later in the episode. However, after the events of HCBBS, Keralis obtained the deed for ZombieCleo's Season 7 Zoo.

He started building his shop, Lookie Lookie at my Bookie, in Episode 5. He built Keralis Building Essentials in Episode 9. He later removed it and made Lookie Lookie at my Cookie in Episode 36. Keralis is known especially in this series as a rich hermit. He has a lavish interior made of diamond blocks for an office, paid almost in all by "Lookie Lookie at my Bookie" profits. This causes many funny scenarios, one of which is in Grian's Episode 44, Grian found a hermit challenge "convince another hermit to buy rotten flesh". Grian picked Keralis, who paid two stacks of diamonds for it. Keralis said soon afterwards that Grian could keep the diamonds.

During the HCBBS Keralis' city was transferred to the ownership of ZombieCleo. This also meant that Cleo's zoo was transferred to the ownership of Keralis. During his time in the zoo, he added custom trees, animal habitats for crocodiles, flamingos and elephants. He also added pathways going around the zoo. He mentioned in multiple occasions that he felt homesick to his city. This might have lead to the conclusion between him and Cleo, that both of them have part ownership to Cleo's zoo and Keralis' city. Due to Cleo having part ownership to his city, Keralis added a office room for her.

Keralis and ZombieCleo found the Sewer Community HQ under their base and plotted a potential revenge to them.

At the start of the season Keralis teamed up with BdoubleO100 and later TangoTek and moved to the Northeastern corner of the continent, forming the Big Eyes Crew. He built the main structure of his starter base and worked with his neighbours to establish the Big Eyes Pass N' Gas shops, with Keralis supplying the majority of the "magazines" (enchanted books) from his villager trading hall. Afterwards, Keralis and PearlescentMoon teamed up in a series of clock heist shenanigans, where they tried to trick BdoubleO100 into giving them his "original" clocks, to decorate the ceiling of Keralis's home office. The largest of the heists took place in the specially-built Cogsworth Manor.

After finishing and decorating his starter base, Keralis built several of the Italian villa-style buildings in the Big Eyes Shopping District, as well as adding an office in one of them to use in a sponsorship in the theme of The Godfather. In addition, he built a battleship by his house for defensive intimidation in response to the mega boat prank by Boatem.

In response to the growing moon problem, Keralis built a space station above his starter house, but also "convinced" XBCrafted to have access to his secret bunker as a backup plan.

Keralis build a modern type house out of deepslate, quartz and snowblocks on a small island group.

The back of the mansion is still unfinished...
Grian
This section is a work-in-progress.
Some information might be incomplete. You can help the Hermitcraft Wiki by adding missing information.

The back of the mansion is still unfinished...
Grian
This section is a work-in-progress.
Some information might be incomplete. You can help the Hermitcraft Wiki by adding missing information.
Keralis's Season 9 Episodes [ View List ] 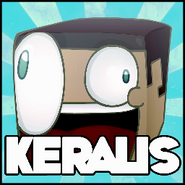 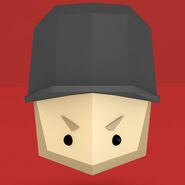 This project is run by the community and is not directly affiliated with https://hermitcraft.com. Content licensed under CC-BY-SA unless otherwise noted.
Advertisement