This article is written in American English.

known, but asked to keep private

GoodTimesWithScar is known for being a landscape builder, working hard to create many large and artistic builds such as a giant tree being rained upon or the Pirate Island he formed around his Season 6 base. He is known as an excellent terraformer among the Hermits. He is also known for his love of his cat, Jellie, who has been added as a skin for cats in the 1.14 Java Edition update. His timelapse music that he calls "super fast build mode", is also iconic within the community.

GoodTimesWithScar has a neuromuscular disease that results in him using a wheelchair as a mobility aid. He also requires external oxygen to breathe.

GoodTimesWithScar is known to have a bubbly, bouncy, and optimistic personality.

On February 25, 2016, GoodTimesWithScar uploaded his first video on the Hermitcraft Season 4 server, entitled 'Minecraft 1.9: Getting My Survival Tent House Started (Hermitcraft Season 4 - Ep.1)'. He went on to make a total of 86 videos on the server - mostly of him constructing his Wild West outpost base - before moving on to Hermitcraft Season 5. In episode 1, he showed another Hermit's clip (he was in the hospital at the time) of the server launch on a deserted island. The Hermits then swam to a huge mesa biome, which was where most of the builds were going to be. After the clip ended, GoodTimesWithScar proceeded to construct a tent out of colored terracotta on one of the mesa's plateaus and put chests and a bed inside. The next few videos consisted of him building two more tents and a Wild West-style wagon facing a campfire in the center and him terraforming the area with trees and bushes.

He built the courthouse and was the honorable judge for the State vs the Collaboration.

GoodTimesWithScar built his starter base in the side of a hill calling it a "hobbit hole" a type of architecture from J.R.R Tolkin's The Hobbit and The Lord of the Rings. GoodTimesWithScar struggled building the base when he was attacked by a group of zombies while dealing with lag and totaled a personal record of 16+ unintentional deaths in one episode.

GoodTimesWithScar was in charge of teraforming the over 200,000 block dome build site of the underground city which would be the Shopping District.

A post apocalyptic city after a global natural disaster.

He formed the ConVex with Cubfan135. GoodTimesWithScar also created the entire underground district, along with the community portal, his main base, HermitCraft Season 5: Things Go Horribly Wrong While Planning My Base City, and the NCDF (The National Cat Defense Force). He also commissioned MumboJumbo to build a large piston door for the NCDF, and paid him with an IOU, which MumboJumbo would use in the next season of Hermitcraft.

GoodTimesWithScar went out of his way to kill creepers to create a special firework display dedicated to the fans as he thanked them for their support for reaching a 300,000 YouTube subscribers milestone at the beginning of Episode 9 HermitCraft Season 5: Massive Progress On Hermit City! (Minecraft 1.12).

GoodTimesWithScar's base was situated on a set of islands off the coast of the pirate district.

The main island, which he began to call "Scarassic Island" later in the season, was a heavily terraformed island made to look volcanically active and inhabited by pirates. The island featured a giant volcano connected to an almost separate island featuring many spires and cliffs off the side. This half of the island had pirate residences built into the cliffs and in a cavern going through the island. In the back was a pirate ship. His other notable islands included Black Sands Island, which featured his base's main Nether portal. He also had an island with an ancient ruin that the pirates were stealing gold from.

He was still part of the ConVex, now ConCorp. Due to his many business ventures, both in ConCorp and in other stores, he became the richest Hermit during this season.

GoodTimesWithScar contributed some incredible cliffs, among other things, to Area 77 with Docm77. He was also known as Captain Angry Eyes with his own headquarters and office.

In Season 7, GoodTimesWithScar became a wizard due to the infinity portal (built in Season 6), which took him to the season. He built a large snail, called Larry, as a starter base. This base is in the southwestern jungle that he shares with multiple other Hermits, including Grian and MumboJumbo. On the first day, Grian pranked GoodTimesWithScar with a zombie spawner that led to his base. GoodTimesWithScar's nether portal has a dark magic feel with stone highlights, or in his words, "A mix of this Sith temple I saw in Star Wars Rebels, and Stonehenge."

GoodTimesWithScar also dies quite often and sometimes loses most of his stuff. He gets the enchantments back at Keralis' store Lookie Lookie at my Bookie.

GoodTimesWithScar's starter base is a snail, which he nicknamed Larry. He also developed a large fantasy-style elven village also known as the Magical Village around Larry. The village included houses in the trees connected by walkways, and a beautiful fountain and also a super smelter built by MumboJumbo.

GoodTimesWithScar put his robes aside to start work on a new project: a driller named Big Bud and a giant hole to the 1.16 nether and a part of ScarX. This section will be added to as GoodTimesWithScar's base matures. Sadly, 1.16 came before he could finish his hole to the Nether Update, because of health issues of his own and of his cat Jellie. He has said that his control center looks like a toilet. However, after the events of HCBBS, Scar obtained the deed for MumboJumbo's Ancient Monument, first implied by his response to MumboJumbo telling Scar in his Season 7 Episode 72 "I own you Scar", to which Scar replied "I own you now too!".

He and Grian teamed up for the Head Games, because he had a few hundred points worth of Ender Dragon heads. Together, they made Operation 'Fire Lightning', where they bred many villagers and killed them all, due to villager heads having a 100% drop rate. Grian and GoodTimesWithScar eventually won the Head Games, and GoodTimesWithScar got 16 diamond blocks, which Grian gave to him via a beard on Larry.

GoodTimesWithScar initially ran for mayor because BdoubleO100 pressured him to, with GoodTimesWithScar as candidate and BdoubleO100 as campaign sergeant/lieutenant/captain. His slogan was "A tree and a cat for everyone." He has been elected mayor and has removed all the mycelium from the shopping district. He also had a road building competition. His office is situated in the Town Hall, and has Jellie on his chair, a portrait of MumboJumbo, and a surviving sapling. There is also an armour-stand version of Cubfan135 spying on him through the skylight.

For more details, see The Upside Down.

GoodTimesWithScar drilled a hole into the nether and (accidentally) dug right through Grian's tunnel to The Upside Down. He has created a research dig site of sorts and is "excavating The Nether". His main base in the Upside-Down is his maneuverable drill (Big Bud) upside-down, near his larger drill that is breaking through the roof. He also built a large conveyor belt taking ancient debris and nether quartz to the Overworld. Mechanical robots are scattered around the place to add a bit of life. He has made a shop called Ghast Busters which offers Ghast defense and repairs and also has the Ghostbusters vehicle flying out.

GoodTimesWithScar is a member of the secret society Sewer Community. The current location of headquarters is just below the office. Also known as the Sewer cats. GoodTimesWithScar created a catchy theme song for the sewer cats.

"We are the sewer cats

cats of the deep dark underworld

we roam the overworld at night

We sleep where we want and take what we please

cats of the deep dark underworld."

For more details, see Hermitcraft Big Base Swap, MumboJumbo and The Button.

GoodTimesWithScar received the deed to MumboJumbo's base during episode GoodTimesWithScar's Season 7: Episode 54 A "mysterious" object similar to The Button appeared in the trading district. The object in the trading district had a countdown when it went to zero it exploded. After the object exploded it was revealed to be the Hermitcraft Big Base Swap. Who ever owned the deed with a name of a hermit on it "owned" their base but GoodTimesWithScar currently *spoiler*. It is currently a still ongoing event of Season 7.

Aqua Town is a project started by GoodTimesWithScar. It is meant to act as an extension of the shopping district and follows a 1920's - 1950's New York City style.

GoodTimesWithScar was previously a swimmer, but when he was 18 years old, he was diagnosed with an unknown neuromuscular disease that weakens his muscles. This results in him using a wheelchair. His disease has weakened his diaphragm, which makes it harder to breathe, and requires him to breathe with external oxygen. Due to his weakened muscular system, he also requires a feeding tube and goes to the hospital regularly. His family is very supportive of his illness and his brother has traveled with him to events to help with his care, such as Minecon. GoodTimesWithScar has also attended Minefaire 2018 in California.

GoodTimesWithScar has dyslexia, which often leads to humorous mishaps on the Hermitcraft server.

Find links to these skins here 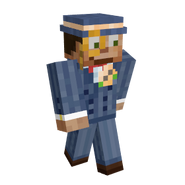 Snips GoodTimesWithScar
Add a photo to this gallery

Retrieved from "https://hermitcraft.fandom.com/wiki/GoodTimesWithScar?oldid=57275"
Community content is available under CC-BY-SA unless otherwise noted.